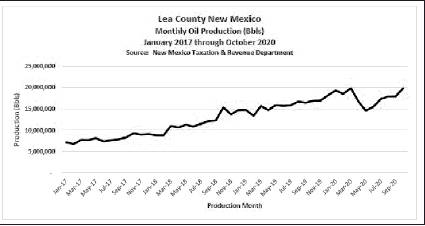 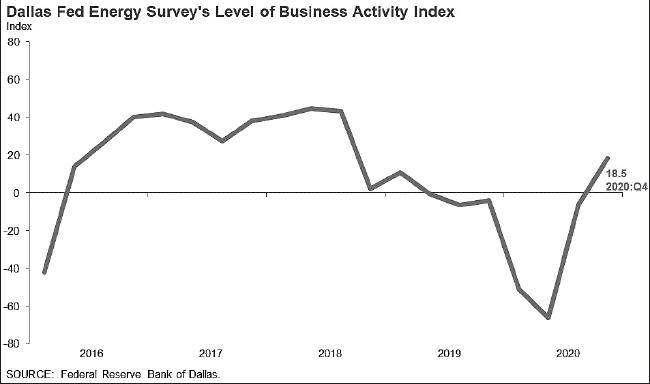 Not just No.1 in the nation all year in 2020, but still setting new records, Lea County produced more oil in October than ever before.

Lea County registered 19,848,553 barrels of oil produced in October, the latest month for which data is available, compared to 19,809,496 in March 2020, the previous record, said county finance director Chip Low.

Based on information he received from the New Mexico Taxation and Revenue Dept., Low said, “Lea County had a new monthly record for oil production in October 2020 beating the old mark set in March 2020.”

The lowest production figure last year came near the beginning of the COVID-19 pandemic after oil prices crashed below zero, resulting in production of only 14,556,883 barrels in May.

Surveying executives in the oil and gas exploration and production companies and oil and gas service companies between Dec. 7-17, Dallas Fed analysts concluded, “The business activity index—the survey’s broadest measure of conditions facing 11th District energy firms—moved into positive territory, rising from -6.6 in the third quarter to 18.5 in the fourth quarter.”

Most oil and gas company executives responding to the Dallas Fed survey said they expect their firm’s capital spending to increase in 2021 rather than decrease.

Thirty-five percent of executives said they expect capital spending will slightly increase, while an additional 14 percent anticipate a significant increase.

Only 23% expect spending to remain near 2020 levels in 2021. Fifteen percent expect their firm’s capital spending to decrease slightly, and an additional 14 percent anticipate it to decrease significantly.

The Economic Development Corporation of Lea County president and CEO Missi Currier expressed no surprise at the good business numbers.

“Industry, like Lea County, once again proves to be resilient,” Currier said. “As the world continues to recover, the Permian’s products will be crucial to us moving forward. The energy of Lea County – in both its natural resources and its people – will continue to fuel the world.”

Low, the county finance director, broke the numbers down to type of land producing oil in Lea County, with federal land accounting for more than half of the oil.

“Governments can either help facilitate (business improvements) or we can help prevent it,” Gallagher said. “Sometimes we have to strike a balance and I think, in the county, we have a really good balance.”

Executives responding to the survey, on average, said they expect a West Texas Intermediate (WTI) oil price of $50 per barrel by year-end 2021, with responses ranging from $35 to $70 per barrel.

The price hit the $50 mark this week, but averaged $47 during the survey period.

Curtis Wynne may be contacted at reporter3@hobbsnews.com.